Project "Let's get to know neighbours in Zemgale"

Project "Let's get to know neighbours in Zemgale"

The 2021 campaign has plenty in store!

From June 11th till August 30th, residents of Lithuania and Latvia are invited to participate and get to know the planned tourist locations of the project and upload selfies to the mobile app "Kaimini Zemgale". This year, only the mobile app will be used and there will be no paper leaflets.

Also, due to the epidemiological situation in Lithuania and Latvia, this year participants are invited to visit selected tourist sites only in their own countries. During this project, participants will have to visit 16 places of interest in their country and a virtual gate at the Adžūnai / Žeimelis border (visible in the SAN app). All persons from 7 years of age can participate.

The attractions of Biržai district this year are the following: Sign "#Biržai" located in the Independence Square in Biržai, shore of Širvėna lake in Astravas manor park, signpost located in Nemunėlis Radviliškis, and Butautai manor.

The project team has created a presentation video that shows all the project tourist sites that participants need to visit, as well - an interactive Google map showing the exact locations and coordinates of all the locations involved in the project since the beginning of this initiative.

As every year, the project prizes are 4 bicycles and 4 electric scooters.

Interactive map (this year's sites are marked with yellow markers).

Video clip of "Let's get to know neighbours in Zemgale" 2021 : here 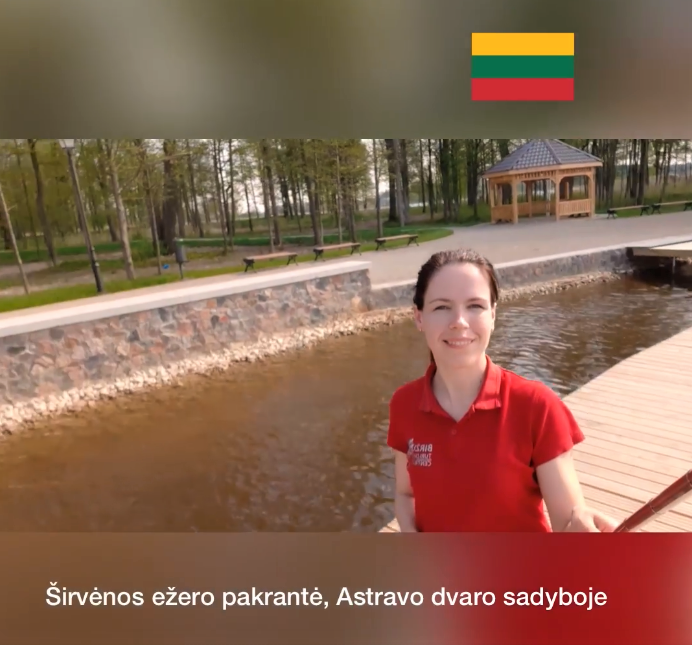 More about our project - tourism campaign

The municipalities of Bauska, Iecava, Rundale and Vecumnieki in Latvia, and Biržai, Pasvalys, Pakruojis and Jonišis municipalities in Lithuania invite Latvian and Lithuanian tourists every year to take part in the campaign "Let's get to know neighbours in Zemgale!".
-
The purpose of the cooperation agreement is to promote the development of tourism facilities, events and services in the territories of the cooperation partners. The most important tasks of the project are to encourage residents to travel and discover the tourism facilities and services offered by the neighbors, to promote business and tourism development, to organize a joint project campaign.
-
In the 2020 campaign, participants won 4 bikes, 4 scooters and 8 sponsor gift cards.
The idea of the cooperation project was born in Bauska (Latvia) at the end of 2016, which the municipalities have already implemented during the 2017 tourism season.
Address
J. Janonio st. 2, Biržai, LT-41148
Phone number
+370 450 33 496
+370 686 73 742
E-mail
info@visitbirzai.lt